Scroll down for the following stories:

For Immediate Release:
February 1, 2019: Hudson, NY: – The Officers & Directors of The Columbia Greene Board of REALTORS® announced the winners of their 2019 Awards program including the most prestigious “REALTOR® of the Year” during their 2019 CGBR General Membership Meeting held on 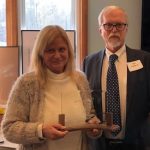 January 31st at their office in Hudson, NY – and announced that Pattie Meyers, Lake and Mountain Realty was indeed their  “2018 REALTOR® of the Year.”

In his remarks, Secretary, Bill Laraway shared that the 2018 winner quietly goes about being there for everyone and every cause and does it selflessly and without fanfare.  It is impossible to know just how much Ms. Meyers really does, because she never speaks about it.  I was surprised to learn how little  I could find out about this phenomenally private person, but when I found the right source the flood waters opened.

It has been said of Ms. Meyers that she is….Kind, Big hearted, self-reliant, fiercely independent, completely self-made, very involved, in professional training, hard-working, and totally devoted to her friends and family.  She is always promoting community events and opportunities.  Her commitment is working with all of her clients and customers to successfully meet their needs to their satisfaction and complete each and every transaction with the highest of integrity and class.

Ms. Meyers grew up in Mount Vernon and has been the Principal Broker of Lake and Mountain Realty since 1999.  She has a son Jake who lives in Oregon. She has also participated as a volunteer with Copake Parks Commission,  Copake Lake Conservation Society, and Roe Jan Food Pantry.

Meeting the criteria of the Award:  Pattie Meyers has excelled in every area the criteria for this important and prestigious Award covers.  Her dedication to the work of the Columbia Greene Board of REALTORS® is second to none.  Her work on behalf of those who most need it is widely known by all and her dedication to the Code of  Ethics,  Professionalism and the highest quality service to her clients is well beyond the norm.  In short Ms. Meyers is the model we all look toward when measuring ourselves for professional excellence.

About the REALTOR® of the Year Award
Since 1956, the National Association of REALTORS®, and the Columbia Greene Board of REALTORS®, have been honoring REALTORS® of the Year during the General Membership Meeting.  The program was designed to recognize REALTORS® who have served not only their profession, but their communities as well with honor and excellence. 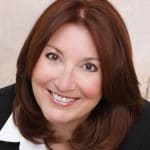 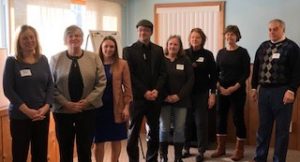 For Immediate Release:
February 1, 2019: Hudson, NY: – The Officers & Directors of The Columbia Greene Board of REALTORS® announced the winners of their 2018 Awards Program during their 2019 CGBR General Membership Meeting held on January 31st at their office in Hudson, NY

In his remarks, Moderator Bill Laraway shared that the 2018 winners were ALL special achievers and all more than deserved this special recognition. CGBR Awards are all judged with an exacting criteria and consideration of all aspects of the nominees activities as well as their business achievements.

A graduate of ICC and a guiding member of the Kinderhook Fire Auxillary, she is a 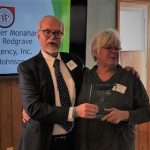 member of a support group that helps direct people in need of a better place in cooperation with Chatham Cares For U Opioids program. A member of CGBR’s holiday committee and overall supporter of our MLS and Board. 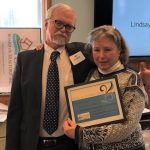 Ms. Lebrecht helps provide canned and other foods to the over 65 people a day at the United Methodist Church Food Pantry. Her work on the Copake Parks commission resulted in the development of a great playground that so many now enjoy. When home sellers are cleaning out they are directed to the Second Show by this person to benefit CMH and Habitat for Humanity Restore. She is the Owner of Copake Lake Realty and is working on her GRI designation. 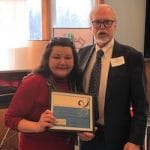 Ms. Barbani is an animal enthusiast and fosters dogs in need of homes.  Her work with “Out of the Pits Rescue” has helped numerous dogs and families find each-other! 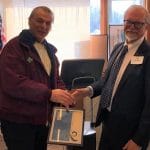 Although not an agent or Broker, Paul Herrington is member of our Board of REALTORS and while having served on many committees, currently serves as Treasurer of the Columbia Greene Northern Dutchess MLS. Paul can be found cooking steaks or rearranging furniture at Lords Acres sale for his church in North Chatham. Hailing from Niverville and working at Farm Credit in Claverack, as an appraiser, he covers the county as well as our organization’s financials. 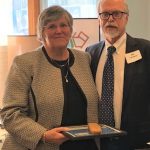 2018 was a truly difficult year for the CGBR having lost its Association Executive and many other challenges. Ms. Page’s dedication to keeping the Association going, supporting President Boomhower and extending her service far beyond her role as Vice President helped to secure the organization’s unending service to its members. In addition to teaching a number of CE courses and service as Professional Standards, Grievance Committee Chair she somehow managed to serve as Search Committee Chair that secured the CGBR’s new Association Executive. 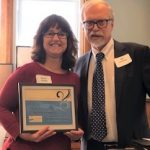 Without humor all is lost – fortunately the CGBR has Karen Davala, whose laugh alone is so infectious that even when in a foul mood you cannot help but smile first and then laugh with her. Whether it is the corny joke or breaking out into song at a membership meeting, she certainly brings a smile to many. Ms. Davala currently serves as CGBR Education Committee Chair & Legislative Advocacy/RPAC Chair and recently achieved her NYSDOS Qualification to teach Continuing Education Courses. 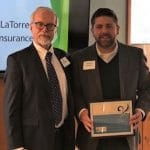 Derick LaTorre is a graduate of ICC and the University of New Haven. He has earned the Certified Insurance Counselor and Certified Personal Risk Manager designations. Derick is currently a member of the CGBR Business Partner Committee and also serves as Chairman of the Valatie Rescue Squad and Chairman of Columbia County Chamber of Commerce. In addition, he serves as Treasurer of the Kinderhook Reformed Church and is a member of the Board of Assessment review for the town of Stuyvesant. He is a Partner of MetzWood Insurance and serves as manager of the Personal Lines Department.

The Internal Revenue Service has issued final rules on the 20 percent business income deduction (Sec. 199A of the Tax Code) that was enacted in late 2017 as part of the Tax Cuts and Jobs Act.

Among other things, the rules confirm that the deduction applies to your business income, as a real estate agent or broker, if you operate as a sole proprietor or owner of a partnership, S corporation, or limited liability company. It applies even if your income exceeds a threshold set in the law of $157,500 for single filers and $315,000 for joint filers.

In addition, the rules provide guidance that NAR has been seeking on two other provisions of importance to you:

Eligibility of rental income
If you generate rental property income, that income can also qualify for the new deduction, as long as you can show that your rental operation is part of a trade or business. The IRS has released proposed guidelines that include a bright-line test, or safe harbor, for showing that your rental income rises to the level of a trade or business. Under that safe harbor, you can claim the deduction if your rental activities—which include maintaining and repairing property, collecting rent, paying expenses, and conducting other typical landlord activities—total at least 250 hours a year. If your activity totals less than that, you can still try to take the deduction, but you’ll have to be prepared to show the IRS that your activity is part of a trade or business.

Eligibility of 1031 like-kind exchanges
Under earlier proposed regulations, if your income was above threshold levels set in the tax law—$157,500 for single filers, $315,000, for joint filers—and you had exchanged one property for another to defer taxes under Sec. 1031 of the tax code, the amount of the new deduction might be reduced because of the swap. NAR and other trade groups reached out to the IRS to change this treatment, and the IRS has made that change. Under the final rules, you can use the unadjusted basis of the depreciable portion of the property to claim at least a partial deduction.

“The final rules are the result of several months of advocacy and collaboration between NAR, our members, and the administration,” says NAR President John Smaby. “They reflect many changes that NAR sought to ensure the new 20 percent deduction applies as broadly as possible.”

Columbia-Greene Board of REALTORS® and NAR Award $1,430 to Support Copake Memorial Park

The Columbia-Greene Board of Realtors ® has received a $1,300 Placemaking micro-grant from the National Association of Realtors®,  and will contribute another $130 to support playground improvements at Copake Memorial Park. CGBR nominated the Copake project for the NAR Placemaking grant, at the recommendation of Lindsay LeBrecht of Copake Lake Realty, Copake resident, and member of the town’s Parks and Recreation Commission.

HUDSON — When Laura Coyle closed a deal on her new house in Athens this April, she joined a growing trend: single women who are outpacing men in buying homes.

For Laura, who works for the state, graduating from renting and buying a home was part of her plan for a good life for herself and her 2-year-old daughter, Juliette. The sweet two-bedroom cottage-style house she found, with buyer agent Angela Lanuto of Coldwell Banker Advisor Realty in Hudson, has an acre of land and a river view. .