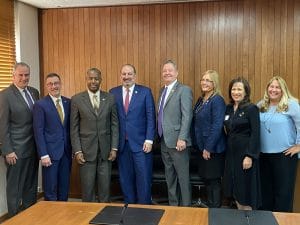 Leadership from the National Association of REALTORS® met with U.S. Department of Housing and Urban Development Secretary Ben Carson and other senior HUD officials on Wednesday in Washington to discuss fair housing just hours after unanimously passing a new plan to tackle the issue.

The meeting, which included NAR CEO Bob Goldberg and President Vince Malta, allowed NAR to reiterate its commitment to partnering with HUD to advance fair housing protections. The two sides agreed to work jointly on public service announcements and other proactive initiatives to communicate the importance of housing access for all Americans.

“NAR has been active in our pursuit of innovative new policies and partnerships that will help us preserve the fundamental right of housing in America,” said Malta, CEO of Malta & Co. Inc. in San Francisco. “While we have long been a champion of the Fair Housing Act, recent incidents have underscored the progress our nation must still make.”