A playground grant for the Copake Town Park is one example of how Realtors support their communities.

Members of Columbia-Greene Board of Realtors and Columbia-Greene Northern Dutchess MLS gathered to celebrate their part in construction of a new playground in Copake, which was built with financial help from a  CGBR grant initiative. With an application last year to the National Association of Realtors, CGBR obtained a $1,300 Placemaking grant for the Copake park project. Realtors’ added donations and local fundraising by the Copake Parks Commission closed the cost gap and the playground was dedicated this May. 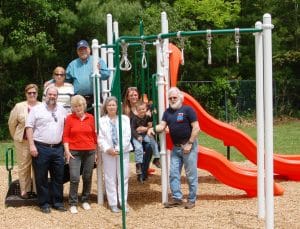